Our priority was to make an appearance to the place where the idea of the tour began, last November. 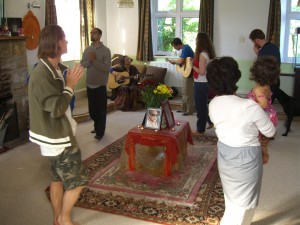 There were 10 of us singing together in such a large room inside a friend’s house which previously was a school. There was plenty of space around for us to dance individually and not be concerned about touching others. This meant we could surrender our ego and spend more energy thinking about the Love for god/everything/all.

Towards the end of the kiirtan we call experienced the same extreme happiness, from the controller of the universe. We were collectively calling His name and we were given His love and grace. We felt His bliss. 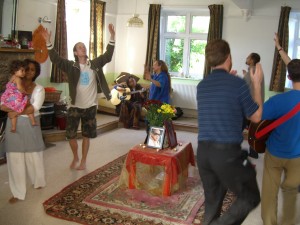 I felt like this experience/time at the moment was similar to a child’s extreme happiness. The difference is the child’s happiness is driven by external objects/events such as receiving a gift or going to a place which is exciting or fun, whereas this happiness we had is available from within – it’s internal. Part of ourselves. We all collectively sang His name with love towards Him and we got love in return. We felt light and so happy that we wanted to dance and jump high. I certainly felt blissed.

This was the highlight of the tour so far.

That evening a friend suggested for me to join them at 5am to sing kiirtan and practice meditation together. I was having doubts after going to bed after midnight, I didn’t set an alarm for that early time. In the morning I heard an alarm at 4:45 and someone using the shower in the bathroom nearby. I looked at the clock until 5am and then decided to get up! I’m glad because the 15 mins of kiirtan were great and best of all I sat for over 35 minutes in meditation which felt very positive and uplifting, especially from the vibration and energy left from the evening before. It was my best early morning meditation ever. 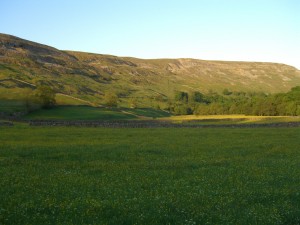 There are no users currently online

Are you sure that millions died from cv19?
Cv19 deaths are counted for any reason, getting killed in a car accident, murder by remdesivir or midazolam and morphine in hospitals and uncare homes, pneumonia, literally anything.

What is cv19? What is a case?
A positive result from a pcr test…
A test which can’t diagnose if you are ill
A…Read more

Many in the so called Alternative media are actually reinforcing the MSM!

They keep parroting all of the FAKE CV nonsense, when statistics alone PROVE there is, (and never was), a pandemic.

Why are they not asking the following questions:-

1. Why did the WHO change the definition of a pandemic to “cases,” instead of deaths?

THE Covid vaccine should never have been released to the public because of its experimental nature, and it is giving rise to such serious complications and concerns over future risks that the rollout should be stopped immediately.

DR TESS LAWRIE has written to Dr June Raine, the chief executive of the MHRA, calling for an immediate halt to the vaccine programme citing 1,253 deaths, including one maternal death in pregnancy, 12 stillbirths and 888,196 adverse events.
And now she has urged the MHRA to share with EbMC Squared CiC full access to the Yellow Card adverse event…Read more

Peer-reviewed research from The Lancet shows that the experimental vaccines reduce your chances of catching COVID-19 by:
Pfizer: 0.8%
J & J: 1.2%
Moderna: 1.2%
AstraZeneca: 1.3%
“…The absolute risk reduction (ARR), which is the difference between attack rates with and without a vaccine, considers the whole population. ARRs tend to be…Read more